Home » A Guide To Answering Your Questions About Merging With SPAC

A Guide To Answering Your Questions About Merging With SPAC

Impacts That Inflation Has On Businesses: The Good &The Bad08 September 2022 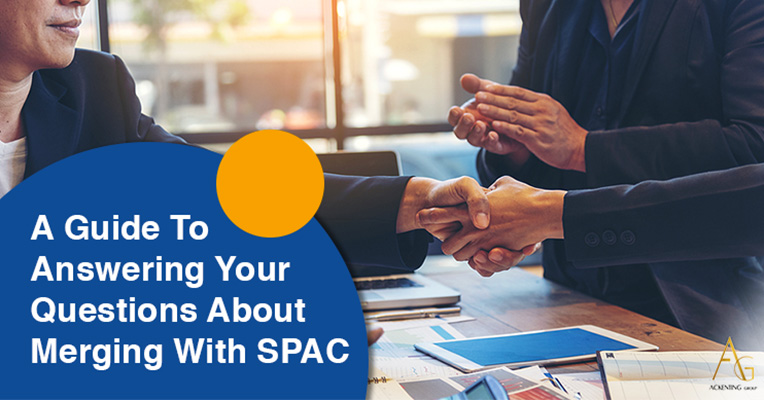 Undergoing a transition to a public corporation is a significant milestone for any private business. It means being able to generate capital to fund other aspects of business operations further, reduce operating debts, as well as open business growth opportunities. While an initial public offering (IPO) is one of the most common ways that many private companies in Singapore take to go public, the transition process can often be complicated and lengthy, thus not suited for every company.

Many companies, not only in Singapore but also in the surrounding regions, have been merging with special purpose acquisition companies (SPACs) in order to go public, and this method has been gaining popularity over the years.

SPACs are publicly-traded corporations that form with the sole purpose of acquiring private businesses to help them go public. They also are known as “blank check companies” as they have no particular acquiring targets or known business operations. SPACs are typically formed by sponsors or investors with particular expertise and knowledge in an industry or sector who intends to pursue deals in that particular industry. SPACs’ investors generally range from the general public to private equity funds.

Funds raised through SPACs are placed in an interest-bearing trust account. The founders of the investing SPAC then have a limited timeframe of 18 to 24 months to source a suitable private business to acquire.

The funds collected in the trust account can only be disbursed for any of the two reasons:

Though SPACs have been around for decades, their popularities have only risen globally in recent years. In 2020, a total of US$80 million was invested across 247 SPACs in the US. Later in 2021, a record of 613 SPACs acquisitions was made in the US, bringing the investment value to approximately US$162 billion. This is a significant comparison to the 59 SPACs that were formed in 2019.

This increased interest in SPACs landed in the Asia-Pacific region too. In September 2021, Singapore introduced its SPAC framework, welcoming three SPACs to this day. With Asia being the ideal investment opportunity, it is predicted that more companies in the region will be involved with SPACs, both as acquisition targets and acquiring sponsors.

Regardless of the route you take to go from private business to public corporation – SPAC or IPO, you will definitely face the same regulatory scrutiny. However, there are certain advantages that SPACs offer, such as:

Challenges of SPACs and how to prepare for success

While SPACs offer lots of advantages, they are not without any challenges. The companies that are to be acquired must prepare for:

Hence, it also means that the targeted company will require proper guidance and an expert merging management team to ensure readiness to transit.

According to Singapore’s SPAC framework introduced in September 2021, companies must ensure they meet the following criteria in order to be a sponsoring SPAC:

Whether you decide to go public using the SPAC or IPO route, always look far. Being a public corporation comes with obligations and regulations to uphold. Hence, engaging an accounting firm like Ackenting Group that provides all-in-one corporate solutions such as audit services, company incorporation services, corporate financing, GST services, and secretarial services, among others, ensures that your company is ready for the readiness of going public and upholding proper legal requirements. Contact us to find out more!