How Small Teams Are Able To Get Stuff Done Efficiently

How To Scale Your Business Without Hiring More People02 March 2020 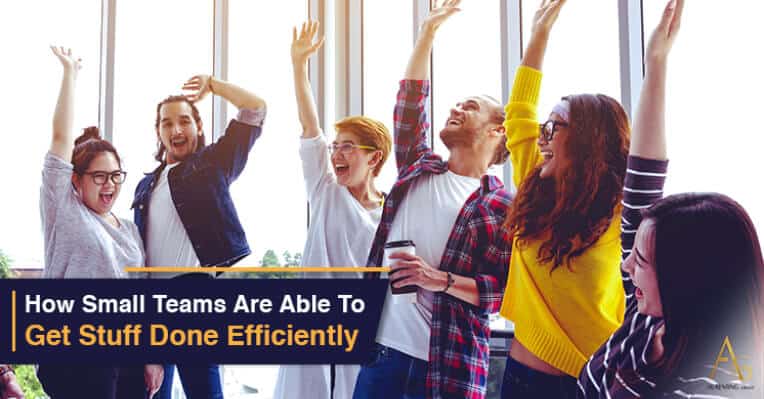 Jeff Bezos, the founder and president of global e-commerce giant Amazon, is famous for his ‘two pizzas rule’ on teams. According to Jeff, two pizzas should be enough to feed any team – this concept hints that the ideal team should be small enough.

There’s a reason why one of the wealthiest men on Earth, who also commands the world’s largest e-commerce site, vouches for small teams. Small teams are able to get stuff done much quicker.

Read on and learn how small teams get stuff done efficiently.

In a study conducted by three professors from UCLA, two teams were each given a set of LEGO bricks. The first team comprised of two individuals and the second team was made up of four. The task was simple. Each team was to collaborate and put together a certain structure. Although it was a simple structure, the smaller team actually completed the task faster. They spent 36 minutes while the larger team spent 56 minutes.

When a team has fewer people, interactions are more authentic and there’s more chemistry than protocol. Smaller teams might have better motivation than larger ones to achieve their tasks. They also have better communication and clarity of goals – they can work together cohesively to understand the client’s objectives and deliver better results.

Studies show that when people are clear about the objectives of a team, or company, the more motivated they are to work towards that goal. Ease of communication makes it possible to articulate the goals to each member. The more articulate the goal, the more realistic and attainable it is for each individual. This also makes way for increased motivation and enhances collaboration between the team.

French scientist Maximilien Ringlemann came up with this theory that the concept entails the effort a team puts into performing a task. For instance, if two men were pushing a stalled motor vehicle, each person would exert more energy than if there were four people.

The effort input by an individual diminishes as a team grows bigger. With teamwork, more things can be achieved and there is greater productivity on individuals. This is similar to the LEGO builders experiment. Smaller teams mean greater clarity on goals, faster decisions, and each person puts in more than larger groups.

When the vision is clear, motivation is high, and the team experience better with interpersonal chemistry and better communication, everyone feels responsible for the team’s outcome. It becomes the team’s passion for keeping the momentum and delivering results. It’s easier to emphasize trust, a shared vision and work with fun and inspiration. Thus, smaller teams get more done, even when the reward seems less.

In conclusion, when you have a smaller team, creativity is higher. You can make decisions faster, and each person puts in extra effort to get the job done. You’ll spend less time, effort and resources to ensure stuff gets done efficiently. At the same time, if you are looking to get more things done, there is always outsourcing. There are professional account services offered by accounting firms in Singapore to manage your accounting requirements for your business.

Should you require any assistance on accounting services, feel free to drop us an email at johnwoo@ag-singapore.com or contact us at +65-66358767. At Ackenting Group, we offer a complimentary 30 minutes online consultation for us to better understand your business requirements.

Warning: Attempt to read property "slug" on null in /home/agsingapore/public_html/wp-content/themes/dfd-native/inc/loop/posts/post_single.php on line 279